Create an Account - Increase your productivity, customize your experience, and engage in information you care about.

The castle-like Armory, designed by architect John Bentz Hamme; Builder: Lawrence Whalen & Co, was built in 1915, of Port Deposit granite, with two hexagonal crenellated towers and its machicolated cornice. Bel Air's local National Guard units marched from its doors to the Mexican border, and to service in Europe in World Wars I and II. This building has seen its share of patriotic festivals, community send-offs and a 1918 victory jubilee. The Armory even became Bel Air's Civilian Defense Headquarters during World War II.

Following the Wars, the armory became primarily a community center which also housed town services, including the Red Cross, the county library and, until somewhat recently, a recruiting office for the modern Maryland Army National Guard.

On April 14, 1984, the Armory was dedicated and named in honor of the late Lt. General Milton A. Reckord, Adjutant General for the State of Maryland for 45 years.

In August of 2004, the Armory was donated to the Town of Bel Air. As caretakers of this iconic landmark, the Town has been dedicated to maintaining and renovating the building, and preserving its military, cultural, and community heritage. In November of 2015, the Town celebrated the 100th Anniversary of the historic building.

In 2010, the construction of the adjacent Frederick Ward Park, or Armory Park as some refer, launched the Armory's new role as more of a complex than a stand-alone building. And prior to the park, the front façade and entryway of the building received a new handicap-accessible ramp and steps.

In the fall of 2016, construction was completed on the garages behind the Bel Air Armory, as this was a vision of the town to provide incubator space for start-ups or businesses to begin and grow. Armory Marketplace is open to the public and encourages residents and visitors alike to shop local.

This complex stands the test of time and continues to generate exciting new possibilities from supporting our Arts & Entertainment District here in Downtown Bel Air along with economic growth having the small businesses connected in Armory Marketplace and the cohesive community gathering place of Frederick Ward Park. It truly is our town’s stronghold!

Closely resembling a castle or the U.S. Corps of Engineers insignia, the Bel Air Armory, like others built at the same time around the state, is unmistakably an armory. The complex consists of the Armory, which faces west on Main Street, and its truck park (parking lot) and garages on the rear of the lot. Constructed in 1915 of Port Deposit granite, the building consists of the main block, five bays by three, two stories over a raised basement, and the field house to the east (rear) of the main block. The front elevation is strongly divided into five bays by the two projecting hexagonal towers which rise to three stories and are topped by crenelated battlements finished in stone coping. A stone water table sharply delineates the first story from the raised basement in both the main block and the towers which provides horizontal movement in the façade. This horizontal movement is reinforced by the corbeled table under the crenelated battlements which top the main block. This level in the towers is a repetition of the stone water course supported by brackets. The block's fenestration shows a balance between horizontal and vertical thrust.

The long, narrow windows are rather deeply set in with the tower windows being narrower than those of the main block in the first and second stories. The tower windows in the third story are mere slits. All the windows but the composite window in the second story of the center bay have stone sills and flat arches which halt the upward emphasis of the windows. The triple window in the middle bay in the second story has a segmental stone arch. This window is echoed in the projecting stone marquee flanking the letters MNG, for Maryland National Guard. Two additional flag poles rise from the battlements along the inside of the towers. The battlements, corbel strip, and water course continue around the building on the north and south elevations. 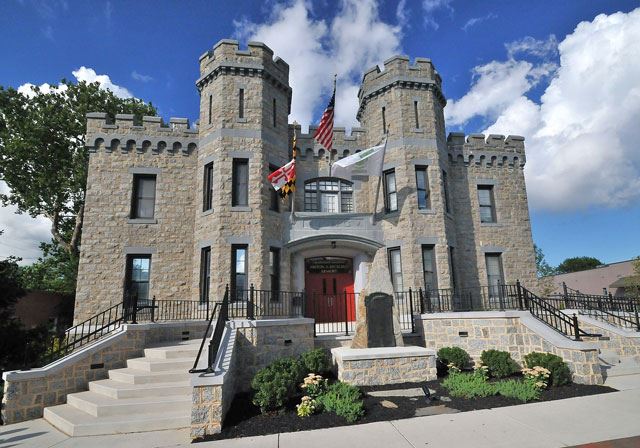 The Bel Air Armory is primarily significant for its association with the reorganization and expansion of the National Guard system in the 20th century. It derives additional significance from its role as a social center for its community, a function it has served continuously since its construction date. Architecturally, the building embodies the distinctive characteristics of its type, including a T-shaped plan with a two-story front "head house" section and a one-story perpendicular "drill hall", currently named our Event Hall, extending to the rear; its façade is detailed to recall Medieval fortifications, with towers flanking the central entrance, crenellated parapets, and strip buttresses.